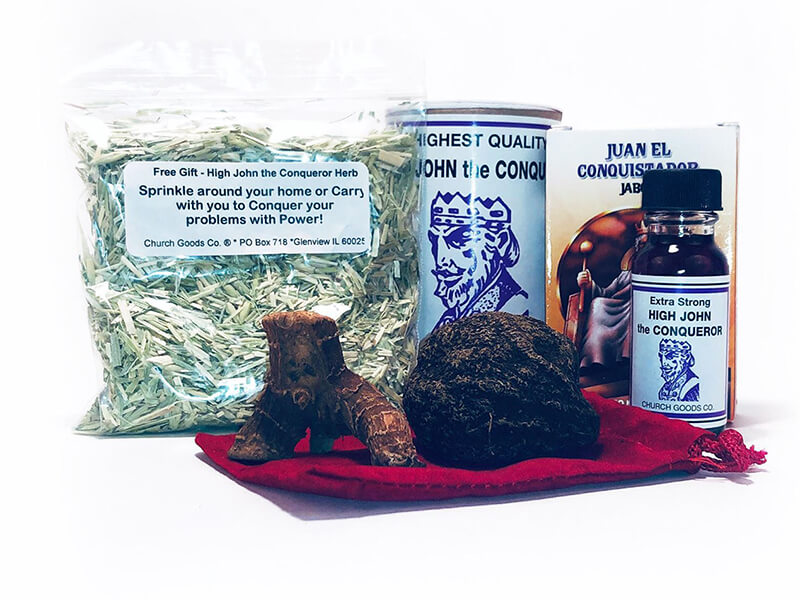 High John the Conqueror Root is among the most popular spiritual products in the Luck Shop catalog. This powerful and versatile herbal artifact has amazing effects including the ability to help people out of a jam and to inspire hope. Blues and folk singers have immortalized High John the Conqueror Root in their music and lyrics and its ability to lift people up and out of what oppresses them.

Who Is High John?

High John the Conqueror (also referred to as High John or Low John) is an African American folk hero from the Southern tradition. It’s said that he was an African Prince who was brought to American and sold into slavery. His wit, selfless nature, and spirituality brought him out of a number of terrible situations and through him other slaves were able to escape the horrors of the day.

High John’s spirit was never broken. He retained his dignity and pride, and helped others to do the same. One story tells of him helping his fellow slaves to leave their earthly bodies behind for a while to escape the pain and suffering they might endure. Some say that he rode a giant crow and took the spirits of people in agony on a ride away to brighter and happier places.

It’s also been told that he fell in love with the Devil’s daughter. The Devil did not approve and assigned impossible tasks. With blessings of special gifts from the Devil’s daughter and with his own bag of tricks, he was able to accomplish all of these tasks successfully. High John was also a shape shifter which allowed him to allude slave masters and the Devil himself.

Known lovingly as a trickster, he inspires laughter in adversity and is a source of hope for all faced with evil.

High John the Conqueror Root is one of the hallmark artifacts of hoodoo – a Southern cultural tradition which blended elements of Christianity, Islam, and African folklore and medicine.

The plant is from Mexico, and it is the species Ipomoea jalapa, a relative of Morning Glory and the sweet potato. It is a small, palm-sized knotty root which is very dark brown in color.

HIgh John was given a root by a hoodoo practitioner who told him to wear it on his right side. This gave him strength and allowed him to have influence over the slave masters. He told the people he knew that he would leave behind his spirit in this particular root. Anyone who uses this root would have his power to remove themselves from whatever pain the were experiencing and have the hope, strength, and courage to do great things.

This whole root is dried and often carried around on the right side in a bag. It’s frequently a major component of a mojo bag. However, it may also be ground or infused in water for sprinkling or oil for anointing.

Do not consume High John the Conqueror Root! But, you may use it by carrying it around in a mojo bag. You may sprinkle it around your home. You can burn incense infused with this amazing herb, or you can anoint yourself or objects with oil.

As America’s favorite Spiritual Goods provider, the Luck Shop store has plenty of products including:

Find these and other related products by clicking the link below.